It plays an important role in the development of many applications, such as quality control in food processing chains, detection and diagnosis in medicine, finding drugs and explosives, or the more common estimation of blood alcohol content (BAC) for drivers. Artificially, this can be achieved by using an array of gas sensors and a pattern recognition algorithm, that is, an electronic nose (e-nose).

Usually, the smelling process with an e-nose (aimed to gather the olfaction data to be processed by the pattern  recognition algorithm) is carried out in three phases: first the sensor array is exposed to a reference gas (baseline), then to the analyte, and finally the analyte is flushed from the system allowing the sensors to recover. 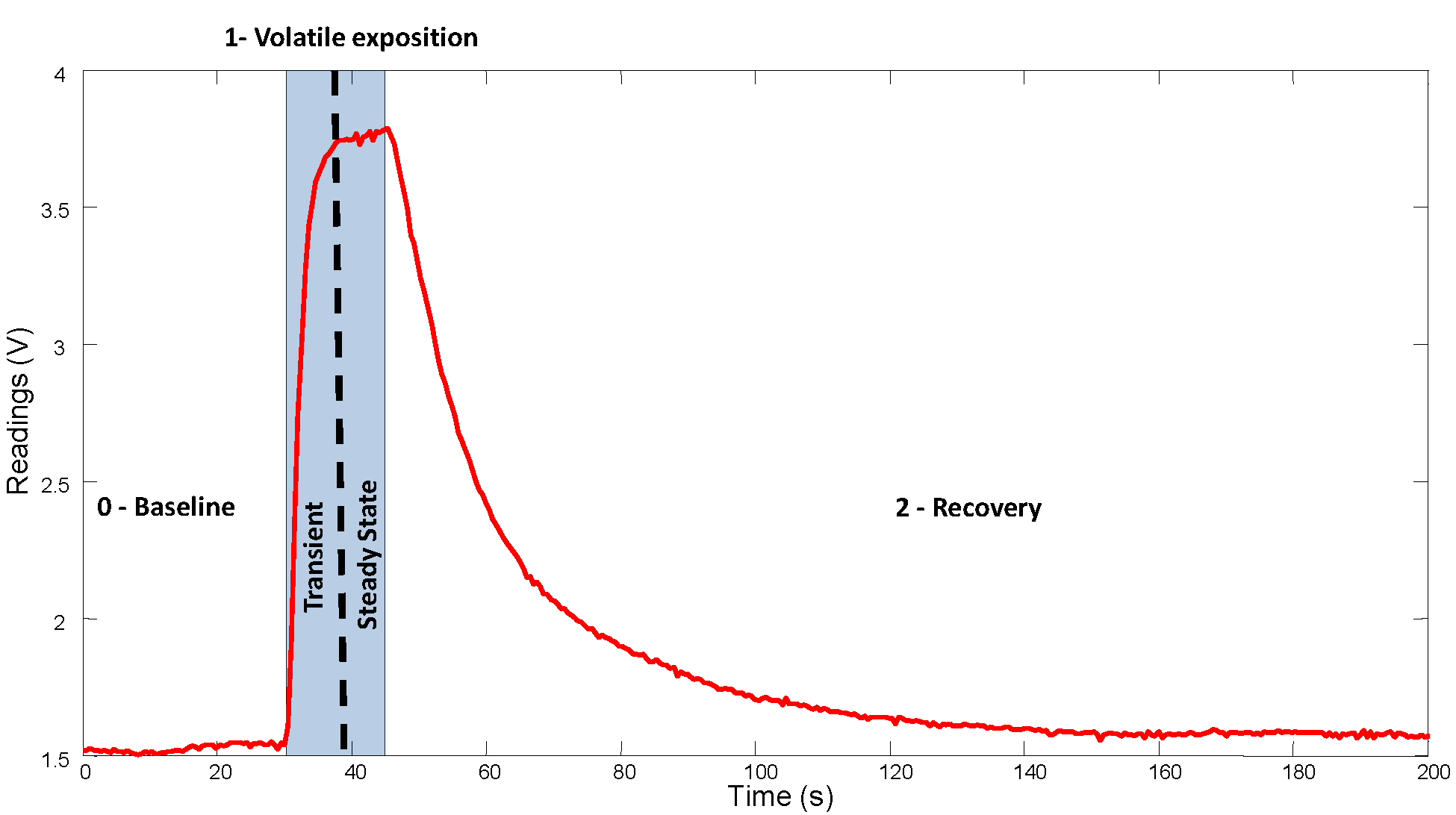 Example of signal collected using the traditional three phases sampling process. The phases of the sampling have been numbered in the following way: 0 baseline, 1 volatile exposition (composed by transient and steady state), and 2 recovery.

Although this technique has shown to be successful for a subset of applications where the sampling conditions are well controlled, there are others like pollution monitoring or leak detection, that require to measure the environment continuously and at different locations. For such scenarios, the use of a mobile robot with the capability of identifying and measuring the volatiles’ concentration is of great help.

In such cases, the signals obtained by the array of gas sensors present a completely different structure, being characteristic that the steady state of the sensors is almost never reached, and consequently the analysis has to be done on the transient phase of the signals.

Example of signal collected with an e-nose carried by a mobile robot in an uncontrolled environment.

We are actively working on the development of new approaches to improve the identification performance of gases with mobile robots. This includes the identification of odors under uncontrolled environmental conditions, with short data sequences, or when multiple volatiles are present simultaneously.

Available datasets aimed at the classification of odors with mobile robots include:

This dataset is composed by more than 120 data-logs, and it includes a detailed description of the experimental setup for each of the three presented scenarios. This dataset can be downloaded here.

We collaborate with some researchers and institutions, covering from research stays to publications and talks. The most recent collaborations are listed bellow: